This 7" plate is one of a pair that showed up.

It is completely hand painted with raised gold dots around the edge. Examining the back reveals the porcelain is slightly coarse and has a decidedly gray cast. It has the look and feel of Nippon. Where it was painted is a mystery as there are no marks at all for identification. Although the workmanship is very good, it is clearly a fake. 🙗 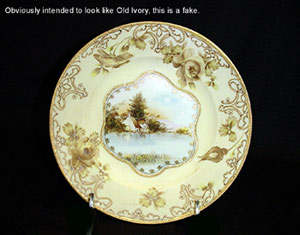 This box is marked with the Saxe marking. The double condiment is in a matching clear glaze pattern. Both pieces are unusal and hard to find pieces. The finder of these is wondering if anyone has ones like these in their collection or if anyone has one in old ivory instead of the clear glaze.

This clear glaze covered box has an embossed stem and leaf on the lid with the rose bud as the handle. 🙗 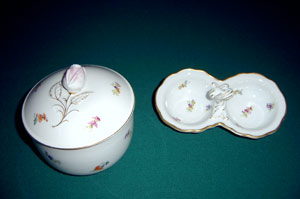 This covered portrait bouillon cup is on the Eglantine blank.

It is very rare to find a covered bouillon in Old Ivory, and rarer still to find it with a portrait on it. (For the most part, the portraits have been on vases and cabinet pieces.) But she didn't find just one....she found 4 and each bouillon cup has a different portrait. There were 3 more lids.....as well. What an impressive set this must have been. Could it have been part of a complete dinner or luncheon set....who knows? 🙗 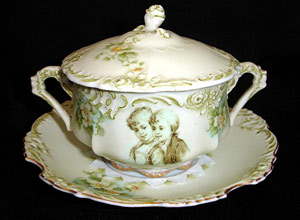 These are demi cup and saucers that have silhouettes of World War 1 German Military Men in uniform.  One cup shows a German military man with his horse.

These pieces only have the Ohme mark and not the country of origin mark - therefore it is most likely that these pieces were not intended for export out of Germany by Ohme.

These pieces were purchased in Germany recently. 🙗 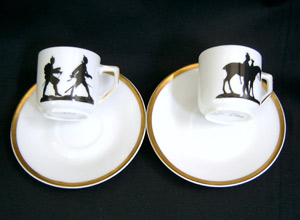 This is a small piece with a silver base. The silver base is engraved and tooled in Germany. Because of it's size, it was probably used for liquor.

This piece was recently also purchased in Germany. 🙗 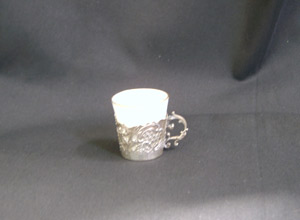 It is on the Florette blank and uses the same gooseberries as pattern #99. It has the Ohme markings on the bottom as well as #105. Clair purchased this chocolate pot with 6 matching cups and saucers from a seller in New York who found it at an antique fare.

It is the latest in new finds and goes to show that you never know when or where a new pattern will show up. 🙗 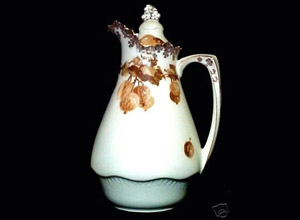 This Ohme Spittoon is the U29 pattern on an Eglantine blank.

This is the only spittoon known in actual Old Ivory rather than the clear glaze which makes it a rare find. 🙗

The piece is an olive dish on the "Empire" blank. It is 6" by 4 1/2" and is decorated with lovely lavendar and white orchids.

Although it is un-numbered, it shows us an entirely different pattern produced by the Ohme Factory. Now the search is to find one that has a pattern number on the back. The fact that this pattern has not been seen before suggests that it may have been an experimental piece, or just was not popular and so very few pieces were produced.

If anyone has a piece of this pattern, please contact os as we would love to find out as much information as we could about it. 🙗 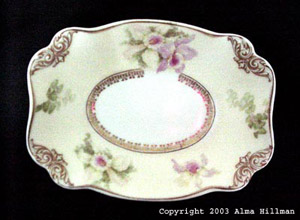